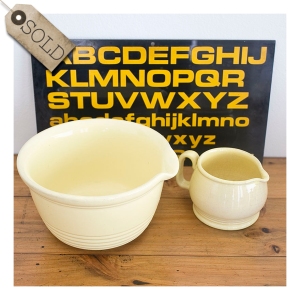 Fowler Ware first began producing industrial pottery in Glebe, Sydney in the 1840s. After WWII, Fowler Ware moved to producing pottery for the domestic market : their pudding bowls were so popular that they opened a second pottery to cope with the demand.

Fowler Ware is now very collectible and becoming harder to obtain: particularly so the mixing bowls with pouring lip. The domestic ware was produced in a range of classic 40s colours: green, yellow, grey, crimson, blue and white. Here we have a large mixing bowl and matching jug in the pastel yellow. The two are a pair- both have matching incised rings around the base.

I’ve teamed the Fowler Ware pieces with a perspex board from an old reprographics factory – I like the framing qualities of the font board- as well as the yellow letters. 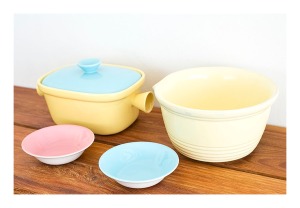 A collection today united by colour and age- rather than by maker. The 50s colourings of baby blue, pastel pink and pastel yellow are exemplified by this grouping. Mix the ingredients in the mixing bowl, cook in the casserole dish and then serve on the serving bowls- tuna casserole anyone?

My own kitchen is a mixture of contemporary cooking appliances and retro kitchen pieces- but I choose retro which is still functional. And that’s the case with this collection- looks good, works just as well as it did in the 50s. The only caveat is: no dishwasher for retro pieces- wash by hand.

This collection is for sale: $95